The Thailand office of the Japanese NGO “SHARE” was approved by the Thai Ministry of Interior on February 15th 2012 to register as a Thai foundation.  The foundation’s new name is HEALTH AND SHARE FOUNDATION (HSF) in English.  The Thai pronunciation is Muniti Peua Sukapaap le Gaan Benpan (Moh.Soh.Poh)

Although SHARE Thailand is now called HEALTH AND SHARE FOUNDATION, the foundation will continue to work on health and social empowerment issues through social outreach under the direction of its effective management team, along with the cooperation of community members and local organizations.

As a SHARE Thailand before establishment of the foundation, the working history is as bellows.

SHARE (Services for the Health in Asian and African Regions) is an international health NGO formed by Japanese doctors and nurses in 1983 to provide medical support to the Indochinese refugee community and promote health and peace worldwide.

SHARE’s initial work in Thailand began with a focus on Primary Health Care (PHC) in Ubon Ratchathani province.  The project began in 1990, with SHARE staff working with village health volunteers to combat diarrhea. While working in this area, SHARE Thailand discovered that HIV/AIDS problems were prevalent at the village level. As a result, SHARE Thailand shifted its focus to HIV/AIDS work, and has been working in this area since 1994 until the present day.

After working on health issues in Thailand for more than 20 years, SHARE’s management staff demonstrated sound leadership and good direction on local, community-based projects, proving an ability to function independently from SHARE NGO headquarters in Japan to become a registered foundation in Thailand.

Detail of the working history

The detail of the HSF open ceremory is here

Medical services were offered in refugee camps at the Thai-Cambodian Border (1983 – 1985).

Because Thailand was very politically stable, in the late 1970s, there was an influx of refugees from surrounding countries that were not so stable. In refugee camps near the Cambodian border, physicians helped with mobile X-ray screening offered by JVC (Japan Volunteer Center).

Health volunteer leaders and Health Center staff conducted twice-a-year health checks so that villagers themselves would know about their own health.

Starting with trash picking with school children and making waste bins with health volunteers, the project was aimed to promote cleaner living and cleaner villages. Afterwards, they started health checks.

Health education and lessons on improving living conditions were offered to primary school children. Health volunteers were invited to help with bodyweight measurement and supplement lunches for children under five at the Health Centers. They joined in preparing menus for supplement lunches.

Financial support was extended to facilities for children unable to afford middle school education; the money was for dormitories, guidance for better life, costs for growing rice, and raising chickens/pigs.

Phase 1 of the AIDS Project was started in 1994 in order to learn the actual status of HIV infection in Northeastern Thailand, to prevent spread of HIV infections, to deepen understanding and awareness about HIV/AIDS, and to help the community to support the infected people. Our activities included, amongst other things, training of health volunteers, village leaders, housewives, youth groups and students regarding “knowledge, awareness, attitude, planning, and implementation of AIDS” so that we would be able to have leaders capable of providing health education for villagers. We offered AIDS education and campaigns in primary schools, middle schools, and universities, aiming at the diffusion of correct knowledge for prevention, understanding of those infected by HIV, and creating communities where people can live without discrimination. We organized HIV-positive mothers’ group in a hospital in Amnat Charoen Province and created a place where they could meet regularly, receive health guidance and discuss problems.

Phase 1 ended in 1998, and Phase 2 was started in 1999. We worked together with community groups and PLWHA (People Living With HIV) groups in order for the villagers to accept HIV-positive people and their families, overcome their discrimination, and solve the problems caused by AIDS as the patients and villagers worked together. In order for people to regard AIDS as a familiar problem, trainings were offered to village leaders, housewives and youth groups, teachers and children on such issues as sex and AIDS, how to care for patients at home, and counseling. As for HIV-positive groups, activities in hospitals were vigorously conducted, and necessary knowledge and places of learning were offered to the group members. From among the HIV-positive groups, some became leaders to organize home visit programs under which members could help and encourage each other.

AIDS Project continuing from Phase 2, which ended in 2003, was launched anew in Ubon Ratchathani and Amnat Charoen Provinces. From among people in the communities where the project was implemented, there appeared AIDS volunteers interested in the problems related to AIDS in their villages and willing to join the project. Leaders of the HIV-positive groups who have been studying AIDS and took the initiative in continuing the group activities, cooperating with AIDS volunteers in the communities, and began playing active roles in HIV prevention and awareness. Thus, SHARE started community support for HIV-positive people.

SHARE Thailand moved its operational headquarters to a new area in Khemarat District in Ubonratchathani province after health stakeholders, the leaders of PLWHA in the previous field, gained the necessary skills and knowledge to become self-reliant and conduct PLWHA group activities without SHARE support. The reasons prompting the move to Khemarat District are 1. Geographic location. 2. The existence of vulnerable groups. 3. The existence of a serious problem with HIV/AIDS. 4. No NGO existence. 1. Khemarat is a Thai-Lao border area where the temporary immigration of migrant laborers from Lao PDR exists on a daily basis. 2. The Thai Ministry of Public Health indicates that there are several groups vulnerable to HIV/AIDS in Khemarat, such as migrant labor, MSM (Men who have Sex with Men), youth, PLWHA. 3. Preparatory research illustrated the seriousness of the HIV/AIDS situation in Khemarat, which at the time contained the second highest number of PLWHA among eight districts on the Thai-Lao border area in Ubonratchathani province. (After 2008, the highest number of PLWHA was recorded in Khemarat). 4. There were no NGOs in Khemarat district before SHARE’s intervention, prompting the start of the current project.

Vision: To utilize excellent managerial practices and cooperation with community members and local organizations to serve the community in the public health sector and strengthen the social prospects of local disadvantaged persons.

Mission: To be an efficiently managed foundation functioning primarily in the areas of health and social outreach, with a knowledgeable and skilled staff capable of promoting participation in every sector of the local community in order to achieve the highest possible social and community benefits for the local disadvantaged population.

Slogan: Uniting hearts and minds to use local wisdom for the improvement of quality of life 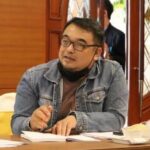 The logo depicts two people holding hands in order to fill their mutual hearts with kindness, cheerful and positive energy, knowledge, and experience, which will be used to improve the opportunities for those with no chance to improve their health.  The blue color represents the positive energy of people who truly desire to work in cooperation with others for the development of sustainable health for the people of Thailand’s Issan region. The logo is meant to show the HEALTH AND SHARE FOUNDATION’s increased focus on health issues and capacity-building among disadvantaged people in the community through sound management and cooperation with local organizations and community members to reach the ultimate goal of better health for all.